- January 10, 2012
Disclaimer: The original version of this post first appeared at TheMovies.co.za.

Whether you love or hate him, you can't deny that Sacha Baron Cohen - of Ali G and Borat fame - makes deliciously quotable, politically incorrect comedies. The Dictator is Baron Cohen's big satirical release of 2012, and the film reunites him with Borat and Bruno director Larry Charles. 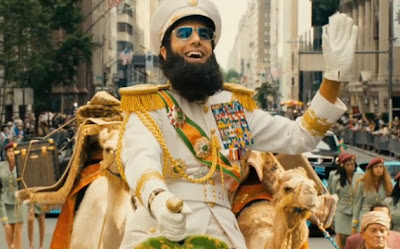 In The Dictator Baron Cohen spoofs the likes of Muammar Gaddafi and Saddam Hussein to play General Admiral Alladeen, the spectacularly wealthy, eccentric and self-absorbed ruler of Wadiya, a fictional republic. The film's official plot synopsis is listed as "The heroic story of a dictator who risks his life to ensure that democracy would never come to the country he so lovingly oppressed."

Digging a little deeper, however, it looks like the actual storyline will see our "hero" replaced by a lookalike and forced to flee through New York. Here, presumably, Anna Faris as the film's female lead will play a spunky American woman who takes the dictator under her wing, and perhaps reforms him. For the record, Ben Kingsley is Alladeen's second in command, and I have little doubt he'll be the film's Big Bad, with designs on the dictatorship himself.

Out of interest, General Admiral Alladeen is the first "original" Baron Cohen character to make it to the big screen. In other words, he never appeared before on Da Ali G TV Show like Ali G, Borat and Bruno did.

Anyway, the big question with The Dictator is whether Baron Cohen and his fellow writers will be able to sustain the concept for a full length 90 minute film without going soft and predictable towards the end? I know I personally would be happy if The Dictator's humour chiefly took the form of audacious dialogue that kept the audience chortling throughout... instead of going for a shock reaction through nudity and gross-out physical humour. Of course, Baron Cohen's films usually strive for a balance between the two, and we probably shouldn't expect his latest to be any different.

The Dictator releases on 11 May in North America. No clue yet when the film will open in South Africa but I'd expect it within a month or two of the US date. 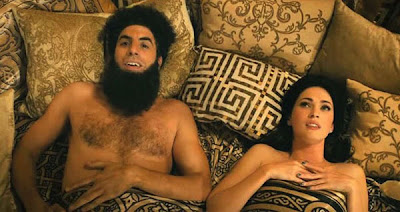