Ryan Reynolds stars as cocky test pilot Hal Jordan, who is chosen to join the thousands-strong Green Lantern Corps - essentially an intergalactic police force of alien beings that enforces peace and protects the universe through the use of superpowered rings. Is Jordan truly worthy to become the first human Green Lantern? Does he have the willpower to stand up to the dual threats of Hector Hammond (Peter Sarsgaard) and Parallax, the Corps' most dangerous foe? This $200 million origin tale answers these very questions.

Well, unfortunately for fans, Green Lantern is pretty much the Sex & The City 2 of recent superhero flicks. Having released last Friday in North America and many other regions, the film is currently sitting with a dire 25% Fresh rating on review aggregator site Rotten Tomatoes. Green Lantern has been called disjointed, noisy, joyless, over-ambitious and sunk by too much exposition. In other words, it's really not faring well in comparisons to the sleek, satisfying and grounded X-Men: First Class.

To be fair to Green Lantern though, Reynolds has been praised for his charismatic performance, and over the past week there has been something of a backlash against the brutally negative reviews... Even if the positive comments have tended to be of the apologetic "it's really not that bad" variety or excuse-making "but it's just a superhero movie" type.

Anyway, it doesn't really matter. If you're a die-hard Green Lantern fan, or are motivated by curiosity to see if the filmmakers have pulled off one of comic-dom's most sci-fi of superheroes, I don't think you'll be deterred by bad reviews. I'm off to see the film on Thursday evening - in blissful 2D - so you can expect my review early next week. 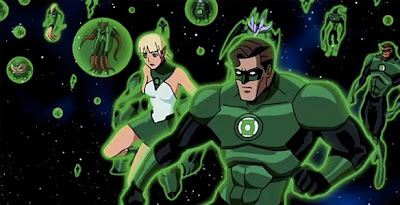 I will say now though that even if the live-action Green Lantern disappoints, you still owe it to yourself to check out the latest DC Universe Animated Film, Green Lantern: Emerald Knights. Clearly, with the right imaginative approach, the Green Lantern universe can be highly entertaining and truly "work" onscreen.

I wasn't a fan of the first Green Lantern animated film, First Flight, but apart from some flavourless vocal work and a somewhat overblown ending, Emerald Knights really delivers. Like Batman: Gotham Knight, Emerald Knights consists of several shorter tales - depicting the greatest Green Lanterns of past and present - which are linked by one major event.

There are a few things that Emerald Knights really gets right. The action scenes, for example, are jaw-droppingly badass - enough to rival Genndy Tartakovsky's 2003 Star Wars animated series.

Then there's the creativity to appreciate. Green Lanterns in Emerald Knights actually use their imagination when harnessing the power of their rings. They don't just blast out green light and create force fields around themselves. The green energy constructs they create reflect their unique personalities and fighting styles. Until watching the film I was largely unfamiliar with purple skinned Green Lantern Laira, but her segment here immediately transformed me into a fan. Raised on a militaristic world, she continually constructs martial arts weaponry for use in hand to hand combat. No floating off and fighting from afar for Laira.

The final thing about Emerald Knights is that the viewer really receives a sense of the Corps' mortality. Unlike most superheroes, Green Lanterns don't come with a godlike aura of immortality. For all intents and purposes Green Lanterns are policemen and women who go out every day, performing their duty until they weaken and fall. There's no retirement for Green Lanterns. They die and their rings select someone else worthy to replace them. That's different, interesting... and poignant. And while Green Lantern: Emerald Knights definitely places an emphasis on action over emotion, I'm pretty sure this core distinguishing feature of the comic doesn't even warrant an exploration in the live-action film.
Books and comics Film

Cleric said…
I saw it in 3D. It wasn't badly done, quite impressive, but not mind-blowing like my experience with Avatar.
The whole movie was cool, but lacked more action, and had an anti-climatic ending that wasn't very satisfying tbh :(
4:02 PM