- March 18, 2010
I’m not an Idols fan. Whether it’s the local version or delayed screenings of the American import, I’m just tired of the concept. I don’t even get a kick anymore out of the first round of auditions, where the usual manipulative sob stories are counterbalanced by laughably appalling singers who are either curiously ignorant of their complete lack of talent, or, more likely (in South Africa at least) there just to mess around. 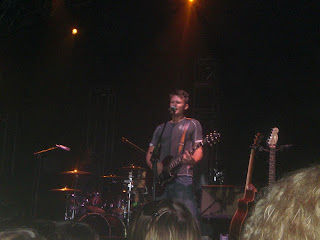 (Above: SA Idols winner Jason Hartman in easy-listening rock action as the intro act to Kelly Clarkson during the South African leg of her world tour. I admit I only knew 1 of Hartman's songs...)

Then there’s the fact that so many Idols just seem to have vanished into obscurity after releasing one piece of utterly superficial (or skanky) bubblegum pop, in keeping with the terms of their contract. Those winners who have gone on to thrive have wrestled for creative control, veering away from the safe and label-controlled, to write their own music and sing in a style more self-representative. Kelly Clarkson, the first American winner, is one of these Idols. And frankly, seeing her live in concert, I don’t know why they’re still bothering with the TV show. Clarkson is the real deal; an original; a powerful talent that this year’s top 24 aren’t even close to equalling.

Regardless of what you think about Idols, it’s obvious that the individuals who get through to the finals, and go through the entire experience, deserve the utmost respect. Not only do they have nerves of steel but they emerge as consummate, confident stage performers – able to effortlessly sing in front of thousands. It’s something many good-looking, studio assembled groups and record label darlings would never even attempt.

Kelly Clarkson is an excellent example of a seasoned, relaxed performer - having had 8 years of practice since her 2002 Idols win. Her 90-minute show in Durban on 14 March, was a slick, high energy affair that highlighted her professionalism. Then again, perhaps it is inappropriate to call Clarkson’s performance a show. There were no costume changes, gyrating dancers or descending disco balls. The All I Ever Wanted world tour is clearly about showcasing Clarkson’s vocal power and surprising diversity. 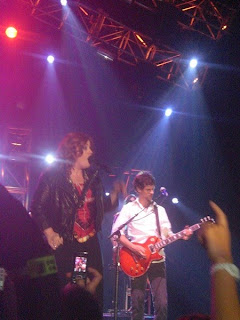 During the concert all the expected hits were present from Clarkson’s 4 albums, including the first massive international single, Miss Independent; practically the entire Breakaway CD, right up to the singer's latest singles, My Life Would Suck Without You and I Do Not Hook Up. Mixing things up a bit on the night, Clarkson even sang a few unexpected covers as a way to express her personal, highly eclectic tastes in music. These included Alanis Morissette’s That I Would Be Good back-to-back with Kings of Leon’s Use Somebody, and even a blues-infused country song from Patsy Cline.

It’s difficult to single out a track that really emerged as the highlight of the evening. Clarkson is known for her break-up songs, whether aggressively empowering, or stripped away, simple and utterly depressing. On Sunday night it was the latter that got to me the most. Clarkson’s Already Gone actually brought tears to my eyes.

What I was perhaps most surprised about Kelly Clarkson is how likeably sincere and engaging a stage personality she is. I remember seeing her a few years ago on a television special that pitted her against Idols from other countries around the world. At the time I thought she was a bit cocky. Standing 4 rows from the front of the stage on Sunday evening I could see in reality that the opposite was true. Clarkson seemed genuinely taken aback at the turnout at Durban’s ICC Arena, as well as the fact that the audience was singing along practically the entire time, shrieking with delight whenever a new song title was announced. 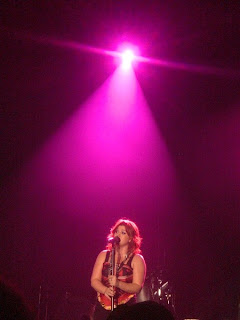 Clarkson was waving at people, winking, and her verbal engagement with the audience wasn’t the usual generic “I love you Durban” concert speak. She was surprisingly frank, funny and self deprecating, almost as if she was in an interview. For example, she spoke about her love of gospel music because she used to sing in church; immediately following this comment with the remark that it was in church where she developed a lot of her issues. When her tube top kept slipping down her chest, she exclaimed “Why, hello ladies,” and laughed at herself.

I never expected to be so impressed by Kelly Clarkson, who is, after all, the winner of a TV talent/reality show. However, after Sunday, I am a newly converted fan. Clarkson's success is well and truly deserved, and more importantly, she puts on one helluva concert – leaving the contented audience to hum and sing their favourite tracks as they exit the venue.

For the record, this was my first experience of an indoor concert at Durban’s ICC Arena, and I was very impressed. I imagine the arena’s permanent side seating is a bit too far away from the stage, so I would always recommend buying tickets for Golden Circle or even General Admission, regardless of whether its standing or temporary seating. This said, I so enjoyed watching a concert at a classy venue, with clean washrooms, reasonably priced drinks and the fact that I was neither rained on, nor had smoke continually blown in my face. That was the best of all. 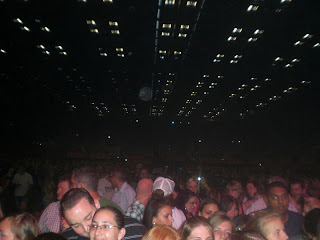 Music Out and About Television