A focus on my Tomb Raider fanfic

- March 19, 2018
Fan fiction is, sadly, a dirty word, and will probably stay that way. Still, I will always remain a supporter of the activity for its writing skill development and audience-building capacities. If I hadn't started producing Tomb Raider fanfic, I probably wouldn't be 50 000+ words into my own novel. But anyway...

This post is really for people who maybe want to read more Lara Croft adventures in the aftermath of the new movie's release, and the announcement about trilogy-concluding game Shadow of the Tomb Raider. So, welcome!

You can find all my Tomb Raider stories on FanFiction.net, as well as a smaller selection of the same set on Archive of Our Own. The following places the spotlight on some of my personal faves, or stories I consider significant for one reason or another. 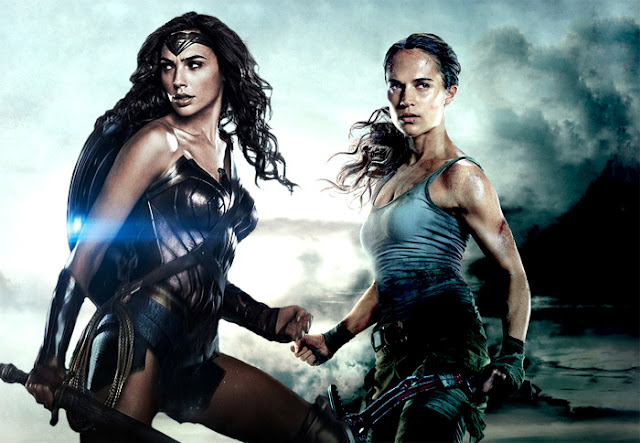 Currently Ongoing
Three or so chapters from the end, Living Legend is my Tomb Raider-Wonder Woman crossover. Its basic premise is that what if, instead of Steve Trevor, the first person to arrive on Themyscira from Man's World was rule-breaking adventurer Lara Croft? How would her presence impact on the isolationist Amazons, and a certain young princess in particular?

Dark Adventurer Lara
If you seek Lara Croft tales that prioritise gritty action, and portray our heroine as a fiery-tempered, experienced adventurer (basically my take on Reboot Lara evolved into the character's Classic form), I recommend these two stories. Still Waters is an underwater survival short, while To Break a Croft is a single chapter fic that pits Lara against Trinity's version of herself.

Winston and Roth
I've actually written a lot of Tomb Raider stories set pre-Yamatai, before Lara has a clue of who she's supposed to become. Early Excavations is one of my favourite fics, and, to my knowledge, one of the very rare ones in the fandom to focus on Lara's mentor, Roth (without it getting ick!). There's also a reworked version of the same story, called Past Explorations, which factors in the lore added to the franchise by Rise of the Tomb Raider (though it was written before the Blood Ties DLC came out).

Finally, for fans of Winston, Lara's doddery old butler, he features prominently in bittersweet festive season story, A Croft Christmas. (I also have another Lara-Winston short brewing, for the record).

LGBT Lara (and Sam)
Now this category of tales isn't just about exploring issues of sexuality, unexpected developing feelings between bffs and sexy-times. Easier to Run is a novel-length, 124 000-word action-adventure set half a decade after the events of the 2013 game. The story is also a bridge between Reboot and Classic Tomb Raider, with many characters from both universes pitching up. Yup, that even includes a reimagined Doppelganger.

Easier to Run is the follow-up to 3-chapter Can't Go Home, which, along with Alternative Medicine, are the two Tomb Raider fics of mine that stick closest to Reboot canon - factoring in events from the comics. I also have to mention Sun and Moon, which was loads of fun to write as it places uni-age Lara in the middle of a feud between Reboot bestie Sam Nishimura, and her LAU equivalent, Amanda Evert.

As a side note, if you want e-reader friendly versions of Can't Go Home and Easier to Run, you can find them here.

And that's it. I will probably never get to write Lara Croft officially *sniff*, so I hope you enjoy these stories.
Books and comics Gaming