- December 03, 2014
Maybe you have a Tomb Raider enthusiast in your life, or perhaps you are the Lara Croft fanatic yourself? Either way, if you’re looking for something suitable for Christmas, and haven’t picked it up already, you may be considering the recently released novel Tomb Raider: The Ten Thousand Immortals, written by husband-and-wife duo Dan Abnett and Nik Vincent. Adding to the temptation, no doubt, is the absolutely delicious cover art by Brian Horton, the Senior Art Director for the new Tomb Raider games. 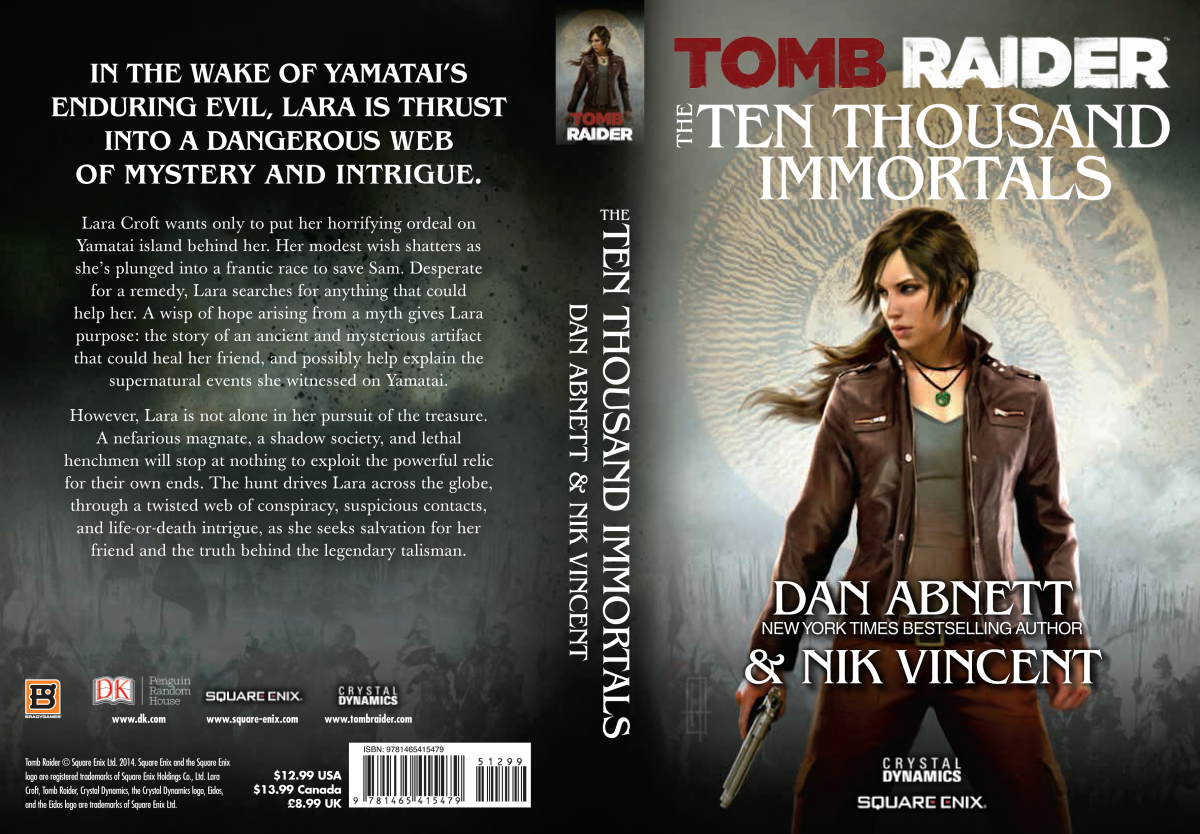 Anyway, without giving too much away, The Ten Thousand Immortals sees young archaeologist Lara Croft trying to adjust to everyday London life after the horrors she experienced on Yamatai. She suffers from severe panic attacks but she has a very pragmatic approach to things: she’s in therapy; she has coping strategies for when the anxiety strikes. So things are okay… That is until her best friend Sam – also a Yamatai survivor – attempts suicide.

Sam wakes from her coma insisting that she is Queen Himiko. Despite how sensible Lara is about her own condition, simply being a supportive bestie doesn’t seem to occur to our heroine. She insists that the only way she can help is through archaeology (uh, okay) and immediately sets out to find a mythological artefact with healing powers. This drops her slap bang in the middle of a conflict between two powerful shadow organisations. Meanwhile, a third, equally sinister player sets their sights on Lara because of her skill at locating lost treasures. When it comes to drawing attention to herself, those Croft instincts are once again a curse. 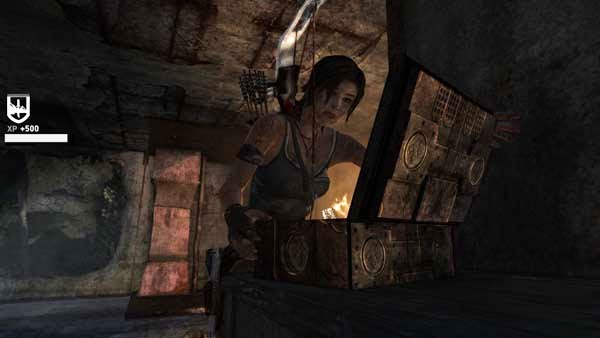 So, the million dollar question: is this 300-page action adventure worth your time and money?

Truthfully, as much as I’m tempted, I can’t slam The Ten Thousand Immortals (here’s a hilarious tweet-style review if you’re looking to snicker at the book’s many failings). There are some things that I did appreciate in the novel, and have to acknowledge if I'm being fair.

1) I am unfamiliar with Abnett’s work but apparently this bestselling author has a reputation for delivering strong action scenes, particularly with a military bent. And there’s evidence of that in The Ten Thousand Immortals. There is a particularly tense, sometimes claustrophobic chase sequence where Lara must evade a relentless pursuer within a maze of cliff-side tunnels. It was my favourite scene in the entire book.

2) There are actual female foes for Lara to face. Pitting 5’6” “Little Rat” Lara against much bigger, stronger enemies has been the standard since the 2013 game. Abnett shakes things up with a supporting character – a female parkour expert – who can actually outrun, outclimb and out-acrobat Lara. On a couple of occasions our heroine is left gaping in disbelief at this woman’s physical prowess. It’s a nice touch and I would love to see Lara matched with similar female enemies in future games and comics.

3) While I loathed the novel’s writing style (more about that in a moment), I was generally satisfied by the dialogue. Although lacking in Classic Lara snark, many an exchange is taut and well-constructed. Some conversations are even quite thought-provoking as they tackle the nature of artefacts: how the mundane can accrue value simply due to context, and whether true appreciation lies in viewing or using an object. 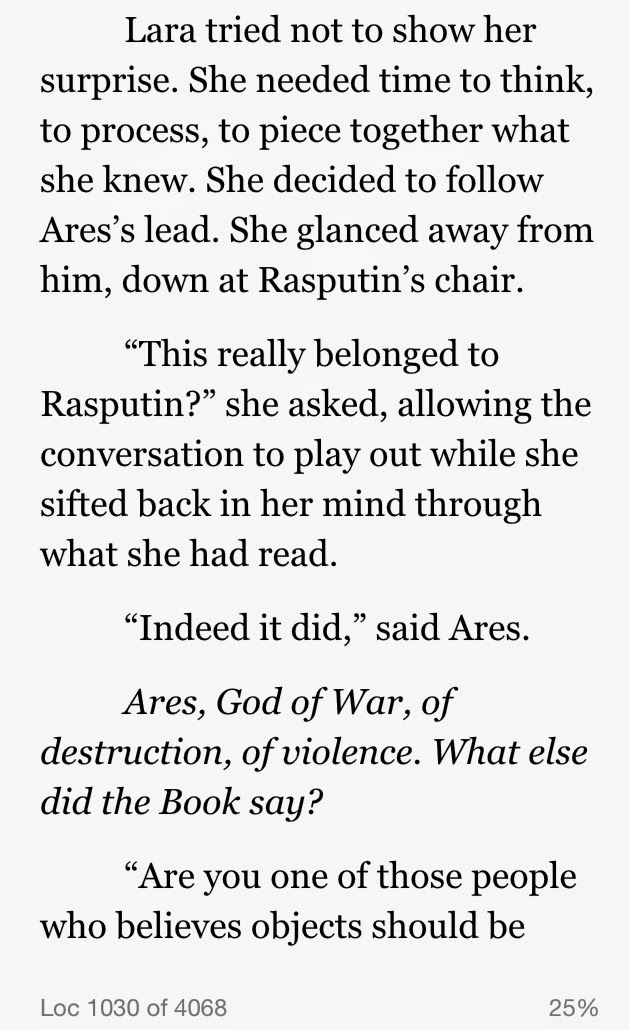 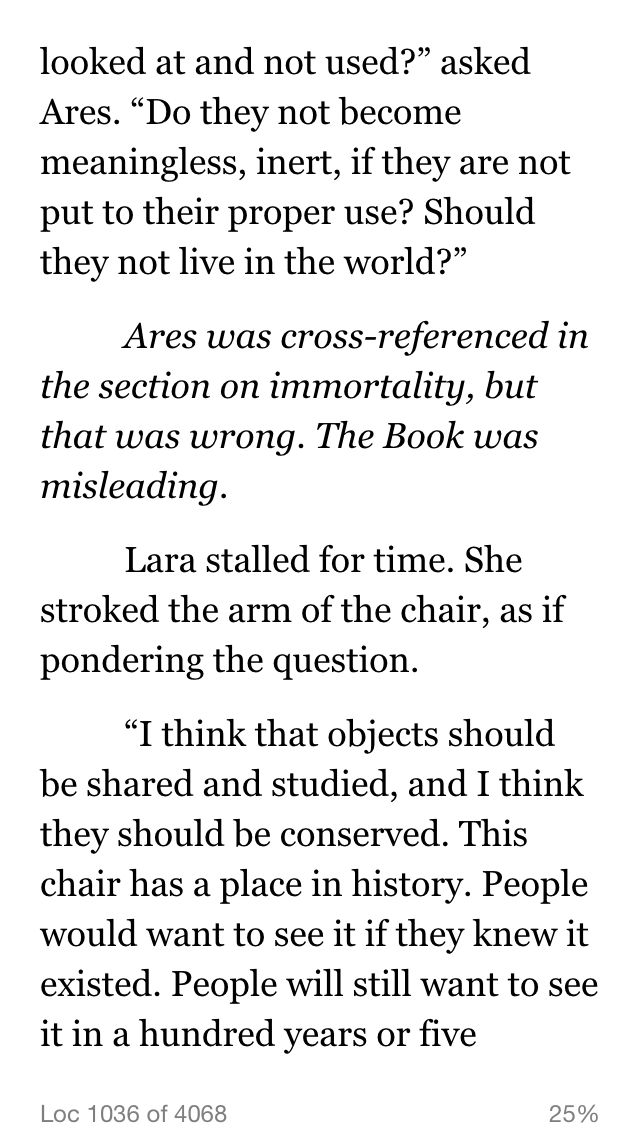 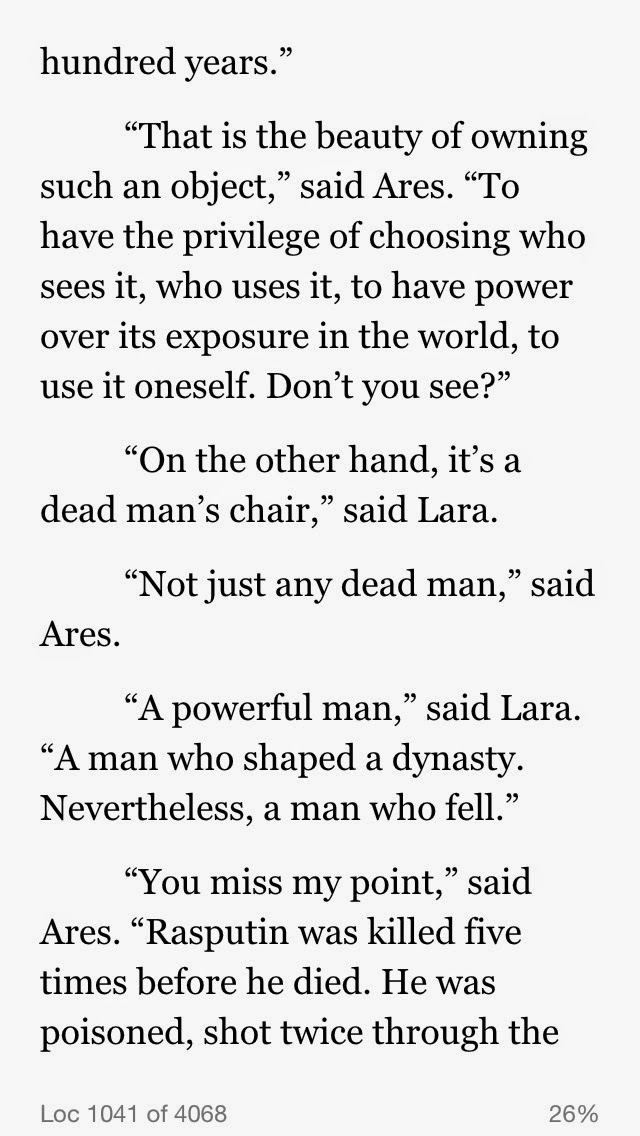 To backtrack a little, when the Tomb Raider video game reboot was released last year, a great chunk of praise went to the characterisation of Lara. Thanks to the efforts of game writers Rhianna Pratchett and John Stafford, Lara Croft was for the first time truly relatable. Of course she still pulls off impossible physical feats but at her core she is a human being, with the same insecurities and vulnerabilities as the player. During her first adventure, we shared in her pain, admired her determination and cheered her triumph over everyone who mistreated and underestimated her.

Thanks to Rhianna and co., Lara felt like a real person. 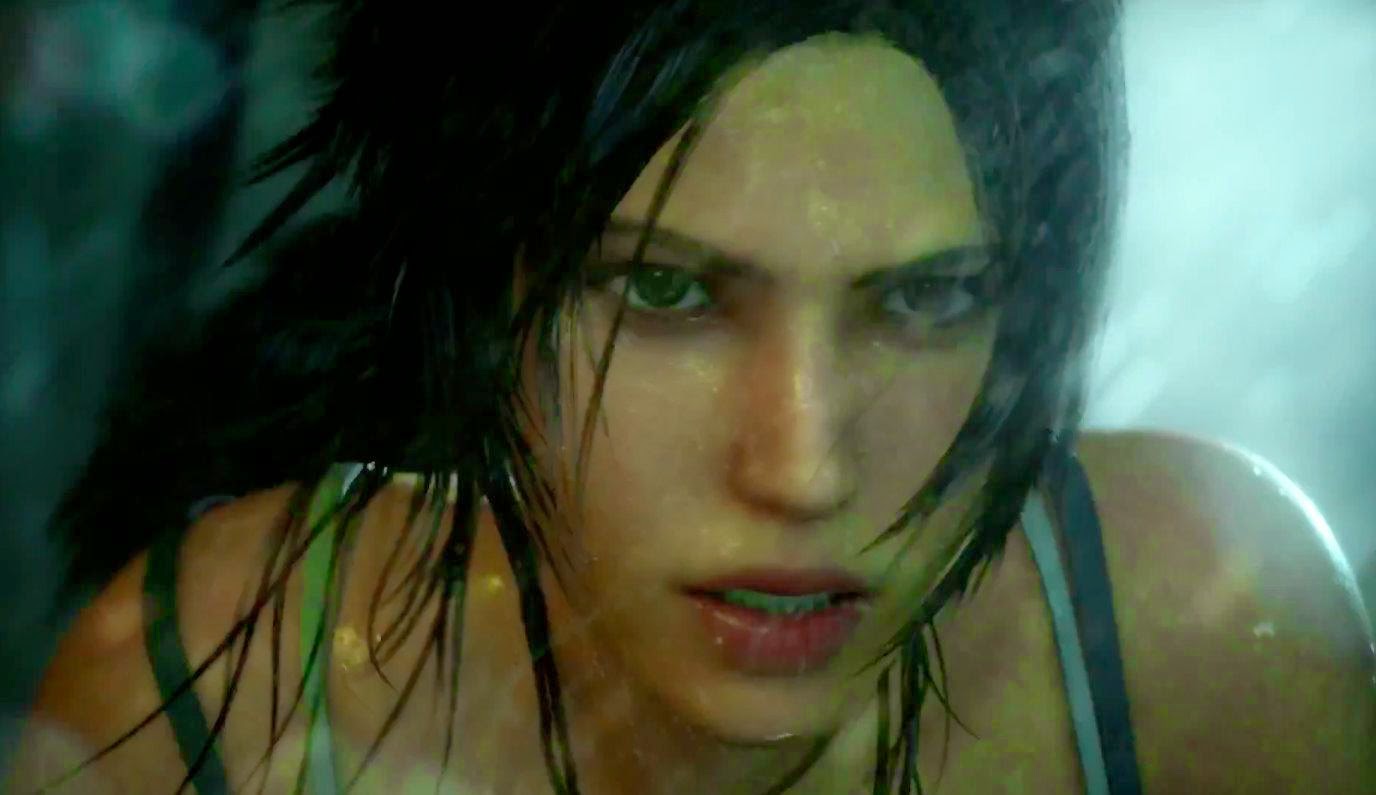 Tomb Raider: The Ten Thousand Immortals prioritises realism too. Except that Abnett and Vincent misinterpret the concept as “insert as much mundane everyday detail as possible.” And, Christ, it’s BORING!

Perhaps it is thrilling to some readers to know that they can actually retrace Lara Croft’s exact movements in real life. Perhaps these same readers also delight in discovering what the fledgling archaeologist has to eat and drink for every meal. (Spoiler: she throws away a lot of perfectly good food simply because it gets cold!). 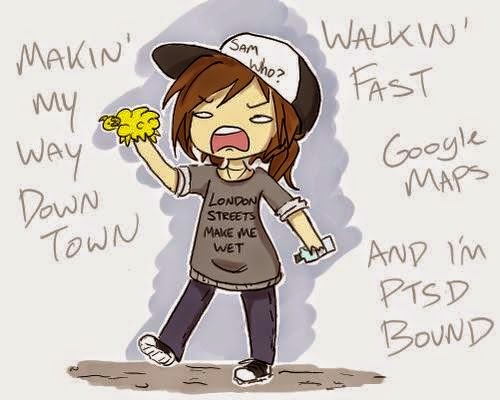 The thing is, this writing approach is technical and dull. Not only does it suck excitement and urgency from the novel, but Lara’s personality as well. It’s like she’s operating on some Schedule 2 sedative for the entire book. Reboot Lara has become Robot Lara, a being capable of three things only: paranoia, Wikipedia research and four-word sentences. She’s completely bland and without spirit. The only thing that provokes any kind of excitement from her is finding an antique map and having a sleepover with a young female art student (lesbihonest!).

After the way the character of Reboot Lara was carefully crafted in last year's game, loads just doesn’t ring true here in terms of her reactions and deductions.

For example, the Sam issue.

Despite a really bizarre suicide note – that I personally thought was going to be a plot point later on – Lara doesn’t question its authenticity. When Sam claims to be Himiko, well, there’s a whole goldmine of emotional turmoil to unearth. A handful of fanfics have already probed Lara’s internal conflict at the possibility of Himiko resurging in Sam’s body. In fact, the original ending of the 2013 game forced Lara to make the ultimate sacrifice – kill her friend; save the world. Yet in The Ten Thousand Immortals, Lara is completely unfazed by Sam’s claims. Despite all the supernatural occurrences she saw on Yamatai, our heroine doesn’t for one second entertain the prospect that the Storm Queen is back and taking over her friend. Instead Lara goes globe-trotting, hangs around in Oxford for a bit, joins an expedition in the Mediterranean, blah blah blah… You receive the sense that there’s absolutely no hurry to help Sam as far as Lara is concerned. 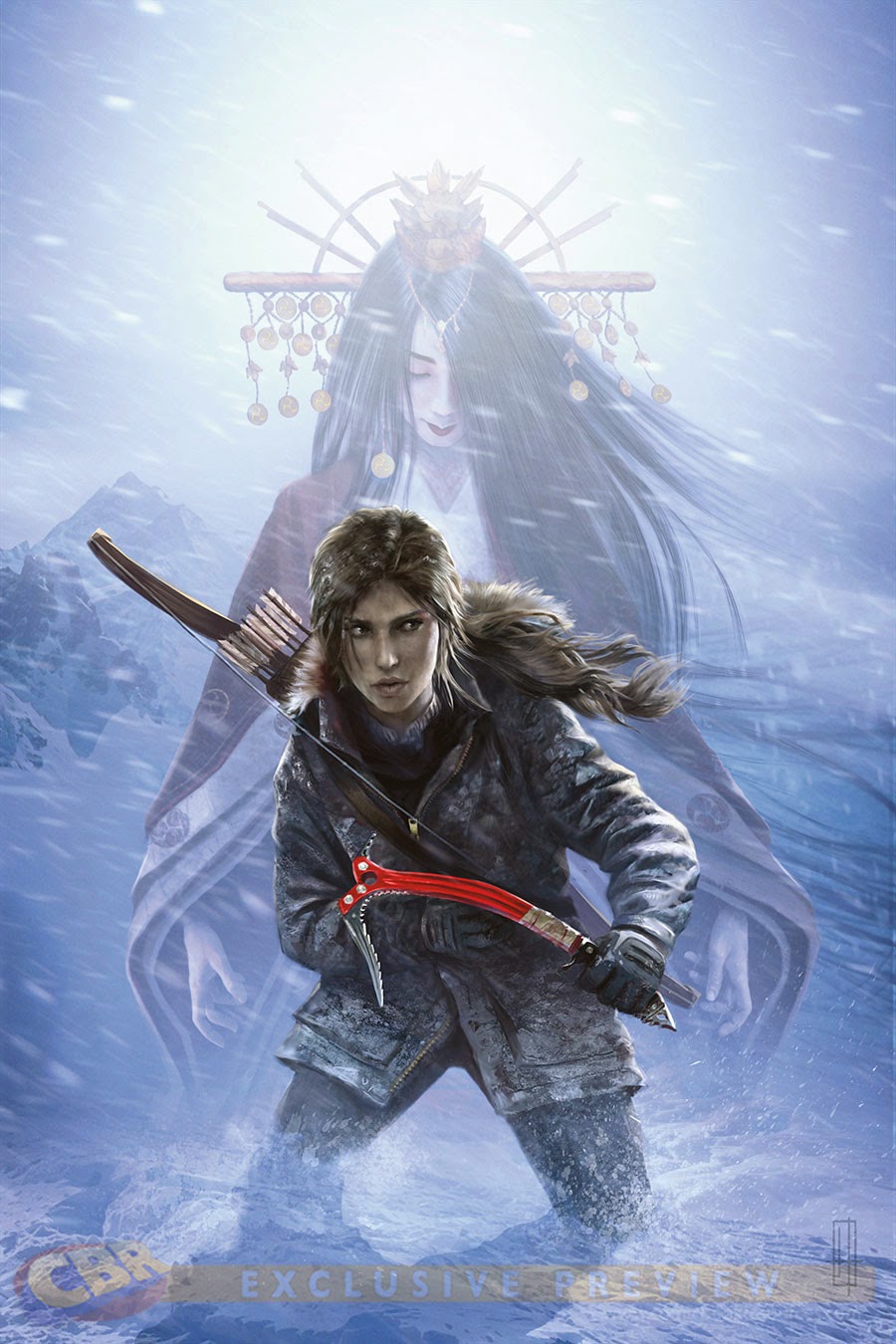 The Himiko possession is a massive missed opportunity, and it isn’t the only one in the novel.

The book’s other major failing is the writing. Perhaps this won’t concern a casual reader but as a writer myself, writing style is very important to me. It’s an extra layer to appreciate, and it does a lot to make or break a reading experience.

I suppose I should have been suspicious of the DK logo on the cover because the book comes across like a sanitised story for barely-teens who evidently don’t like to read in the first place.

For example, unlike the recent comics where Lara enjoys a Guinness and swigs back on a bottle of vodka, in the novel she sticks religiously to tomato juice.

Meanwhile, it’s rare to find a sentence in the book that’s longer than ten words. The Ten Thousand Immortals is a frustrating staccato read that sticks to show-and-tell with very little in the way of imagery. There’s something quite childish about it (Lara’s continual reference to her treasured journal as “The Book” is especially grating). Alternatively, you can think of it as soulless workman’s effort completed solely for a paycheque. Even the POV jumps clumsily and erratically, flinging you out of the novel. 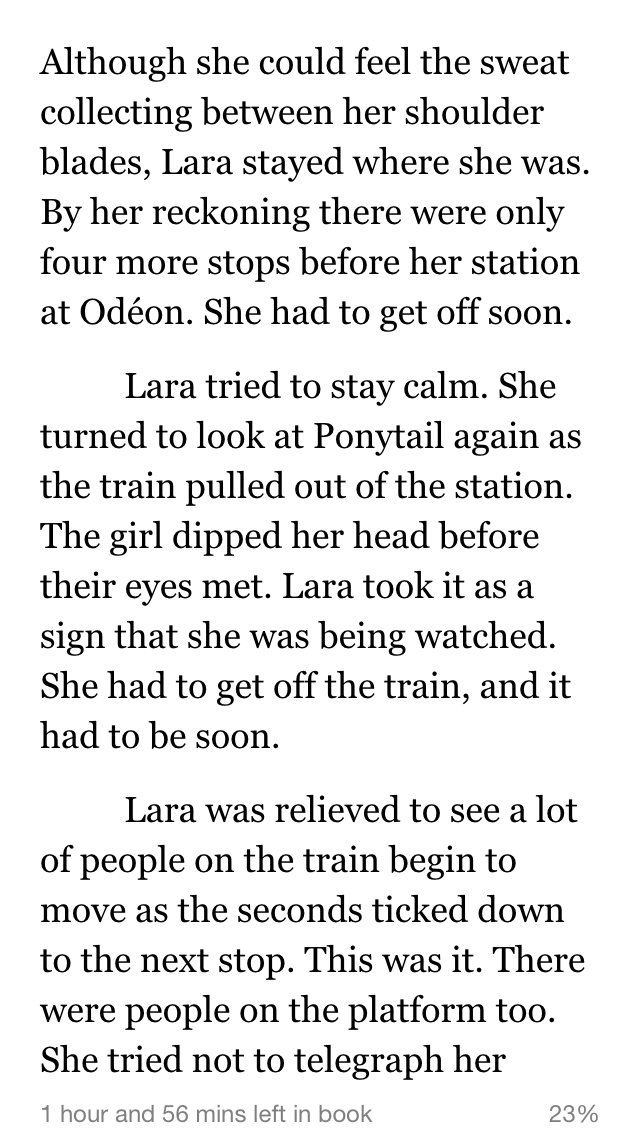 The end result then is disappointing for Tomb Raider fans. The Ten Thousand Immortals has its moments, but mostly it’s unsatisfying, stupid and superficial – ignoring everything that we’ve come to love about Lara Croft, the Classic and Reboot versions. So don’t be conned by that striking book cover. This is mediocrity for 12 year olds all the way. 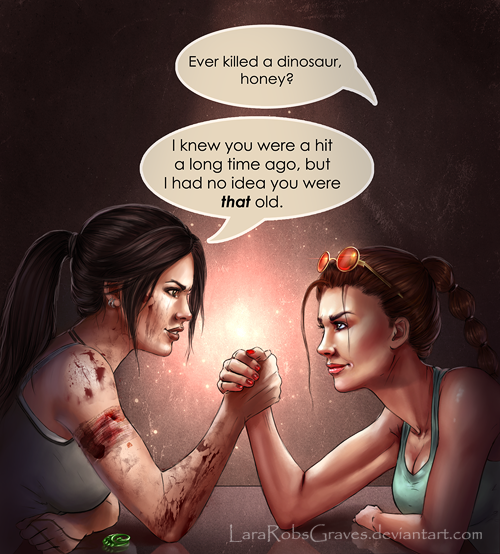 Unknown said…
I was going to purchase that book last week, now it looks silly and I guess I'd rather spend my time on fanfic... Thank you for the reviews!
3:37 AM

As some of you know, I’ve been fangirling hard over the new Tomb Raider , the first entry in the video game series since 2008, and ostensibly a reboot for the entire franchise . Taking the form of an origin story, Tomb Raider 2013 depicts the events that transformed a beautiful, if bookish, archaeology graduate into a pistol-packing adventurer with a devil-may-care attitude. We meet Lara Croft as a pretty, fairly ordinary 21 year old, brooding over her work notes, listening to her mp3 player and very much confined to the shadow of her male mentors. By the end of the game, however, she’s taken charge – she’s had to! – and, battered, bruised and bloody, she’s both a survivor and hero, right down to rescuing the princess and carrying her away in her arms. Yeah, this is probably the best point to mention that there will be some Tomb Raider 2013 spoilers in this post, so read ahead with caution. Anyway, I loved the game. Technically it’s near faultless, it looks beautiful, the ov
Read more 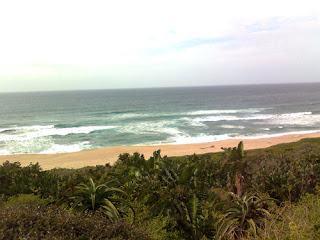 So I'm back in the office after a 4 day weekend. And I'm trying not to remind myself that it's almost 3 months until the next public holiday. Bah! Anyway, pop culture didn't play too massive a part in my mini-break. There was braai -ing (expected on National Braai Day), the baking of pretzels in celebration of Oktoberfest ( even if we weren't in Munich this year ), working on the next Girlz 'N' Games comic , and a family lunch to celebrate my mother and cousin's birthdays. A hefty chunk of the weekend however was spent at one of my favourite holiday destinations: the KwaZulu-Natal South Coast. We were celebrating a friend's birthday at his family's holiday flat in Southbroom. So there was much chilling and eating and games playing, as well as kite flying, dolphin spotting and swallowing of saltwater as I flailed around in the choppy, chilly surf. We even managed to find Emo Shell! Anyway, film viewing was neglected this weekend, with the
Read more

Despite the fact that 5 new films open in South Africa today, not a single one is worthy of an extended Pick of the Week description. If you haven't seen it yet (like me), go and watch Disney-Pixar's Up instead. If you can't get past a deeply ingrained "grown-up" prejudice against animated films, what about seeking out the Johnny Depp-Christian Bale gangster movie Public Enemies ? Hell, you could even go and watch District 9 again. Just stay away from the mediocrity released this weekend. Yeesh. I Hate Valentine's Day - Nia Vardalos reteams with her My Big Fat Greek Wedding love interest John Corbett for this romantic comedy in which a carefree florist lives by a "5 dates only" rule so a relationship never develops and she never gets hurt. A charming restaurateur, however, forces her to re-evaluate her unusual approach to dating. 17% Fresh on Rotten Tomatoes . Karate Kallie - A South African comedy about Kallie, a fat teenager, who is merciles
Read more