Last week I pretty much laid into the laughably cheap and nasty-looking The Legend of Hercules, the first of two 2014 films centred on the mightiest of all heroes in Ancient Greek mythology.

Today we look at the second of the Hercules big screen releases: the simply titled Hercules - also formerly known as Hercules: The Thracian Wars.

Now the above trailer is only a teaser so it's probably not the best idea to draw major conclusions from it. However, my immediate reaction was conflicted.

On the one hand, visually Hercules looks great and there's no shortage of mythological beasties (oh hey, Hydra, Nemean Lion, Erymanthian Boar and Cerberus) - as opposed to The Legend of Hercules, which seemed to strip basically all fantasy from proceedings. As an added plus, Dwayne "The Rock" Johnson really looks the part of the grizzled, veteran warrior who has grown increasingly disinterested in heroics over time.

On the other hand, I quite enjoyed the Radical comic book miniseries - by writer Steve Moore and artist Admira Wijaya - on which this Hercules film is based. Stunningly illustrated, it was all scowls and snarls and blood splatter. However, at the time of reading, I thought it would make a great R-rated blockbuster; a popcorn flick for adults. Good thing then that Brett Ratner is at the helm.

Sadly, and again this could be because it's merely a teaser trailer, I'm not seeing much evidence of Hercules's literary source material here. In The Thracian Wars comic, Hercules heads up a band of mercenaries also all lifted from mythology. They're cynical, faithless and essentially cursed, trudging ceaselessly away from their pasts. All they have is their skill in battle, and they will sell their bloody swords to anyone - including the King of Thrace, who plans to bring the settlements of his wild region to heel through force. There will be slaughter, rape, slavery and pillage, but as long as Hercules is getting paid, he's content to play his part, and train the king's soldiers.

It's dark stuff, and I was always suspicious how much of the book would make it "unsoftened" to the big screen. Certainly the plot seems to have been blunted into a safe tale of how Hercules helps the benevolent Thracian King (John Hurt) and his daughter (Rebecca Ferguson) defeat a brutal warlord. Or so we're being told...

This said, Hercules's band from the comics has pretty much all been cast in the movie: there's virginal huntress Atalanta (Ingrid Bolsø Berdal), Hercules's kinsman Iolaus (Reece Ritchie), trickster and thief Autolycus (Rufus Sewell), seer Amphiaraus (Ian McShane) and brutal Calydonian Tydeus (Aksel Hennie). That's a dubiously large cast to share a few hours of screen time - AND enjoy any sort of development - but we'll see.Hercules could still end up as a predictable, CGI-saturated mess with no imagination; but for now I'm giving it a chance.

Hercules releases in 3D in North America on 25 July. The film opens in South Africa barely a fortnight later, on 8 August. 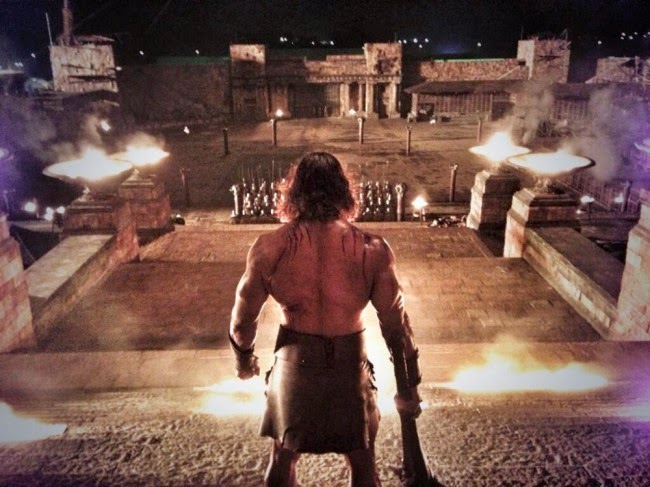